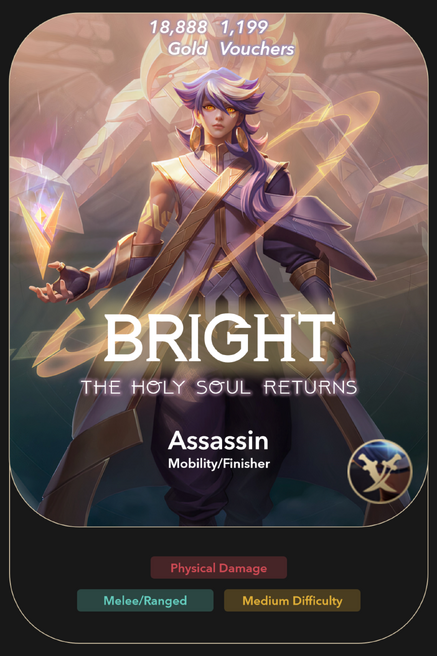 Bright (formerly Etham) is the 106th Hero in Arena of Valor, and one of the few heroes with a localised name for example in German, Hell. Bright was classified as an Assassin-Marksman on his official release, but is now an Assassin.

Bright was born in Okka.

In winter, at the age of 6, he met Veda's original god, Edras for the first time.

Edras walks the earth as a spirit, searching for the truth of the world.

After accepting Edras as his mentor, Bright asked him why he pursued this truth. If a god could not find it, how could someone else?

Edras told him that no matter who a person is, as long as he starts to pursue it, he will find his own answer.

And so the two began to travel the mainland, searching for the truth.

Edras showed him the entire history of Athanor since its creation, but all Bright saw was suffering.

Bright did his best to lend everyone a helping hand, but he couldn't make everyone happy.

He did find the answer though:

Perhaps it should be the world that is corrected.

He turned his head and said to the light behind Edras, "There is no need to pursue the truth. Rather, one should create the truth."

"Make the world what we want it to be."

For either Jungle or Abyssal Dragon Lane:

Obtainable with the purchase of Bright. 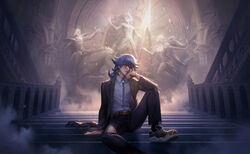 After Butterfly was weakened, Bright took over the Jungle throne. We’re slightly reducing his True Damage because it was too powerful late game.