In Arena of Valor a hero is a character that players can control. Each hero has his own unique set of abilities. Heroes start the game at a low level (1), and earn gold and XP from destroying towers, killing monsters, minions, and enemy players, and passively during the game or a support item. Gold can be used to purchase items that enhance hero statistics and also providing extra abilities. Experience unlocks higher levels of for the hero to upgrade their skills.

There are different classes for heroes, such as marksman, mage, assassin, tank, warrior, and support. Heroes can deal either physical damage or magic damage, buff themselves, debuff enemies, and inflict control effects to others. Some heroes have two roles instead of one, the first is their primary role and that will affect their playstyle. For example, Bright is an Assassin-Marksman. As Bright is primarily an Assassin, he will receive the Enraged Abyssal Dragon Buff Assassin: Soulblade instead of Marksman: Starstrike.

Proficiency is a measurement for how much a player has used a hero. A minimum of Expert (Medium) is required to play Ranked matches with that hero to prevent any players from performing poorly. Proficiency will be gained in all matches in various increments, the highest being 56 per match (apprentices only) or 1 (across all proficiency levels). Players cannot lose Proficiency.

Players can increase synergy from a certain hero by playing them and answering questions through the story.

Each hero has its own story. This tab contains all the detailed information about that hero including the Lore.

The full Lore can be found on the Athanor Map.

Players can increase power for a certain hero by playing ranked matches with that hero. Reaching the 1500 point mark gives a position on the leaderboard of your region. The top 10 players on the power ranking for a particular hero on a server will receive the Server's Best title for that hero at the end of each month.

Note: The cost of the Heroes may be different between servers.

The hero release timeline does not include the latest 5 heroes which released after Allain, being Thorne, Sinistrea, Lorion, Dextra, and Bright. 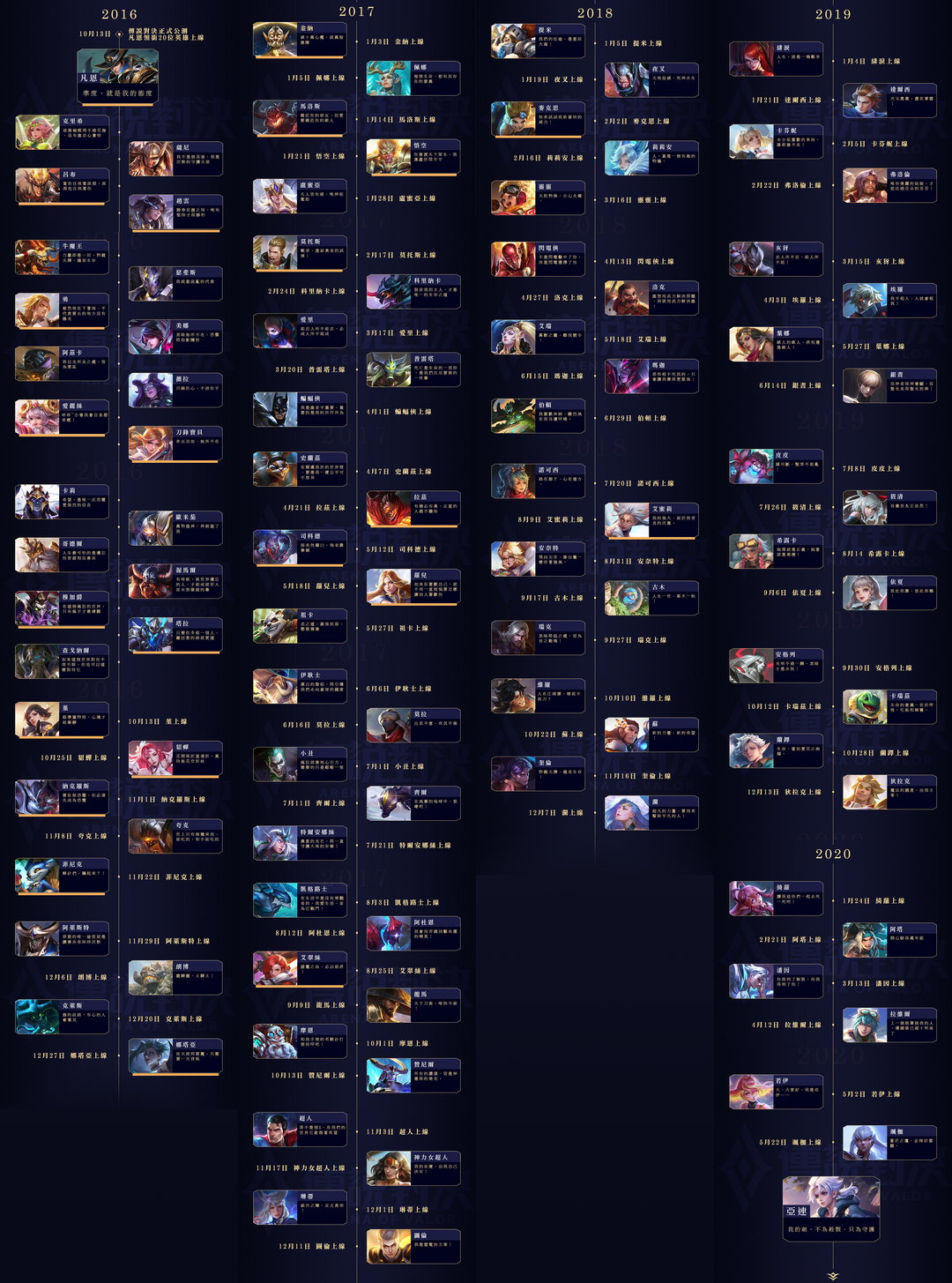 The following is a list of heroes in the game Arena of Valor. To keep you up to date, here are the latest patch notes. As of January 1, 2021, there are 108 heroes. Two are on test servers and have not been released in live servers yet. The latest hero, Bright, was released on December 25th, 2020.